The previous post demonstrated how to write a simple smart contract with Solidity and deploy it to the Ethereum Blockchain. This tutorial will show how to update the contract to save some data in the blockchain as well as how to inspect the blockchain to see our transactions.

We'll work on the same files from the previous tutorial, which can be found here.

If not in the mood of going along with the tutorial, the finished code is available here.

Open HelloWorld.sol and add the following:

As we did before, spin up truffle local blockchain with truffle develop CLI:

Now, we need to update our contract, what under Truffle's Suite is performed with the migrate command. Write migrate within Truffle's console.

The contract is now updated with a public method setPayload deployed at 0x85534E0ec31b63d635CcBa1fb6b953a9C47a9022 (contract address). Write this address somewhere else, we will need it soon. We can verify that the contract was properly updated by fetching the contract instance and checking for setPayload method existence, as well as the value of payload variable:

When we call a function that only returns a value, such as sayHello, the blockchain state is not altered. Since now we want to save a value to the blockchain, its state must be altered and it is done via a transaction execution. We want to execute this transaction from our Python script, the same we used for calling the sayHello method in the previous post. Add the following to the bottom of app.py:

Also, update the deployed_contract_address in app.py with the new contract address (output from migrate). If you don't remember it, go back to the Truffle console and call instance.address.

On another terminal session, execute our Python script:

Not fun, right? How do we know that the data was persisted? Go back to the Truffle console and call payload variable:

This means that our transaction was mined, thus being added to a block that was successfully added to the blockchain.

3. Inspecting the blockchain with Ganache

There are various ways for inspecting the blockchain. For example, using the Truffle console:

transactions lists all the transactions that were added to this block. In this case, there is one transaction that should match tx_hash that was printed when we ran app.py.

To make our lives easier, there is a GUI tool for inspecting the blockchain and its transactions: Ganache. As per their website:

Quickly fire up a personal Ethereum blockchain which you can use to run tests, execute commands, and inspect state while controlling how the chain operates.

After successfully installing and opening it, you should see the following image: 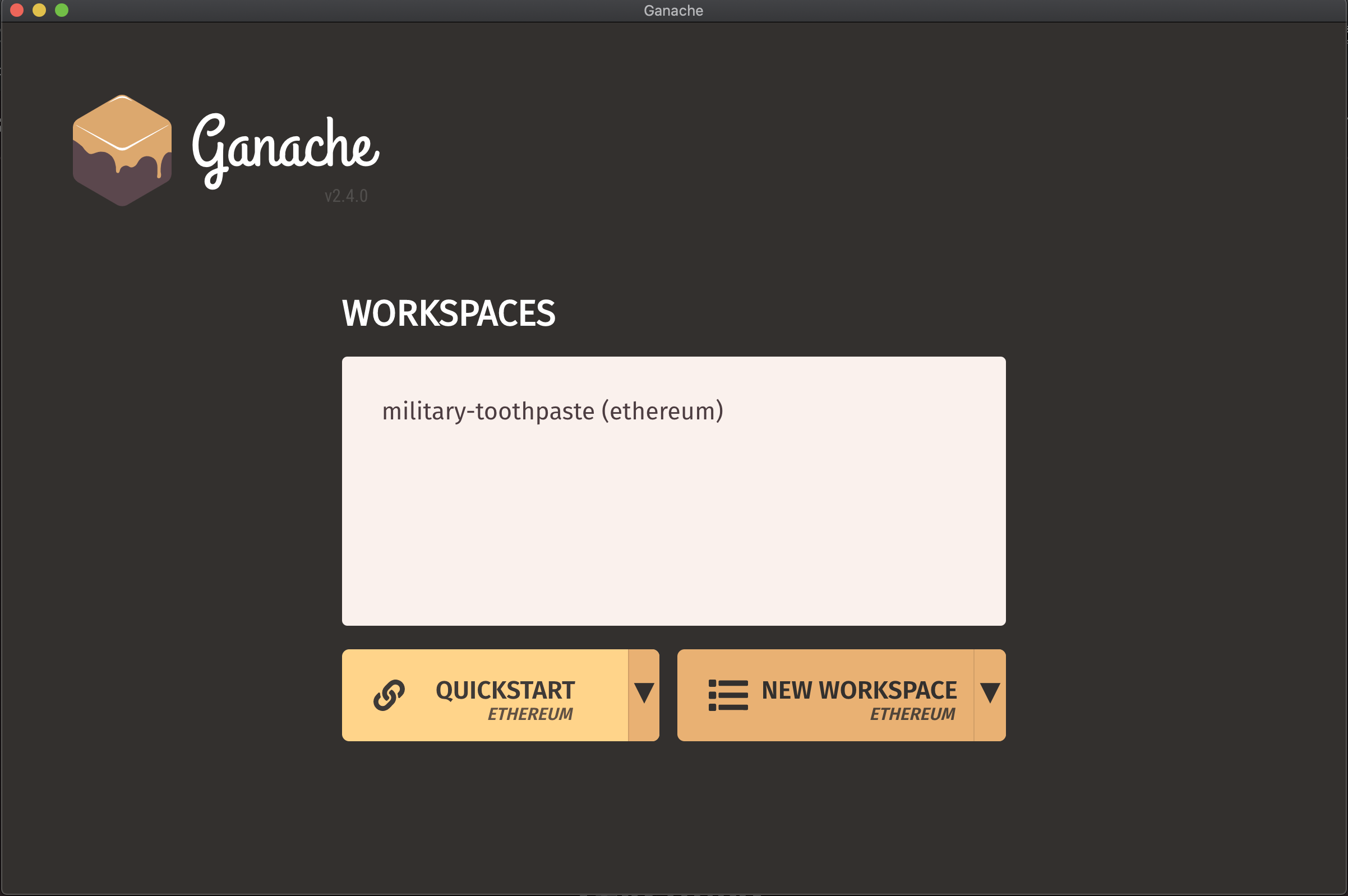 Select "Quickstart" and you'll be welcomed with a screen listing some accounts and its respective addresses (very similar to how truffle develop works). There will be also a RPC Server address, such as http://127.0.0.1:8545, write that down. Click "Save" (top-right corner) so this Ganache workspace is persisted.

When quick-starting Ganache, it created another local blockchain for us. We can now tell truffle to use Ganache's blockchain (which has a nice UI). To do so, open truffle-config.js and replace it with the following:

Go to the Contracts tab, and select Link Truffle Projects. Click Add Project then select the truffle-config.js file from hello-eth/ root project folder. Click Save and Restart at the upper-right corner. 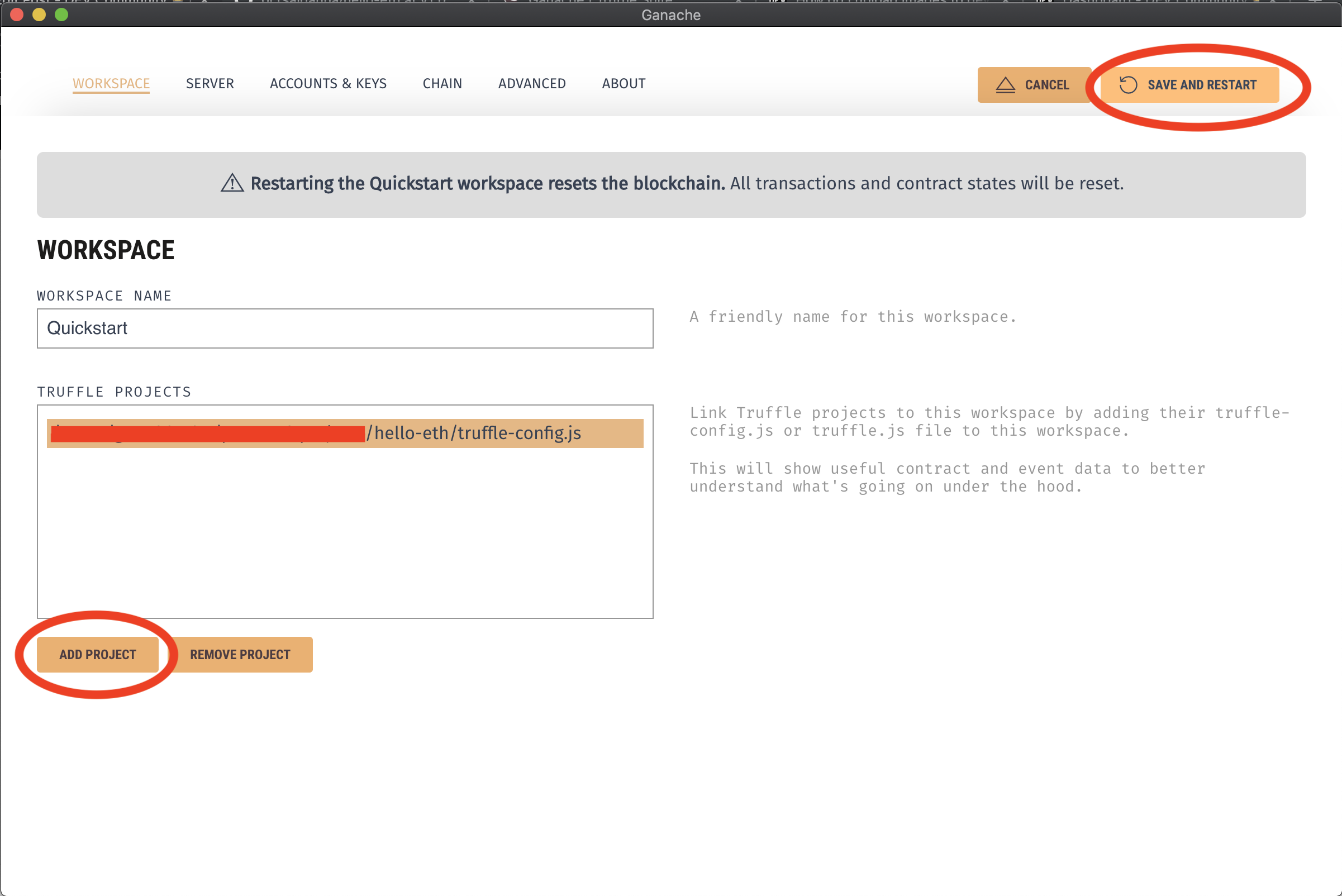 If you go to the Contracts tab now, you should see two contracts:

Open another terminal session, go to the project root level (where truffle-config.js is located), and type truffle migrate. It will deploy our contracts to Ganache's blockchain. Copy the HelloWorld contract address and update the deployed_contract_address in app.py with its new value, as well as the variable blockchain_address with http://127.0.0.1:8545.

Under Contracts tab now, both contracts (HelloWorld and Migrations) should have an address. It means they're deployed! woohoo! Now, run app.py again to execute a new transaction on our newest blockchain and then click on HelloWorld contract: 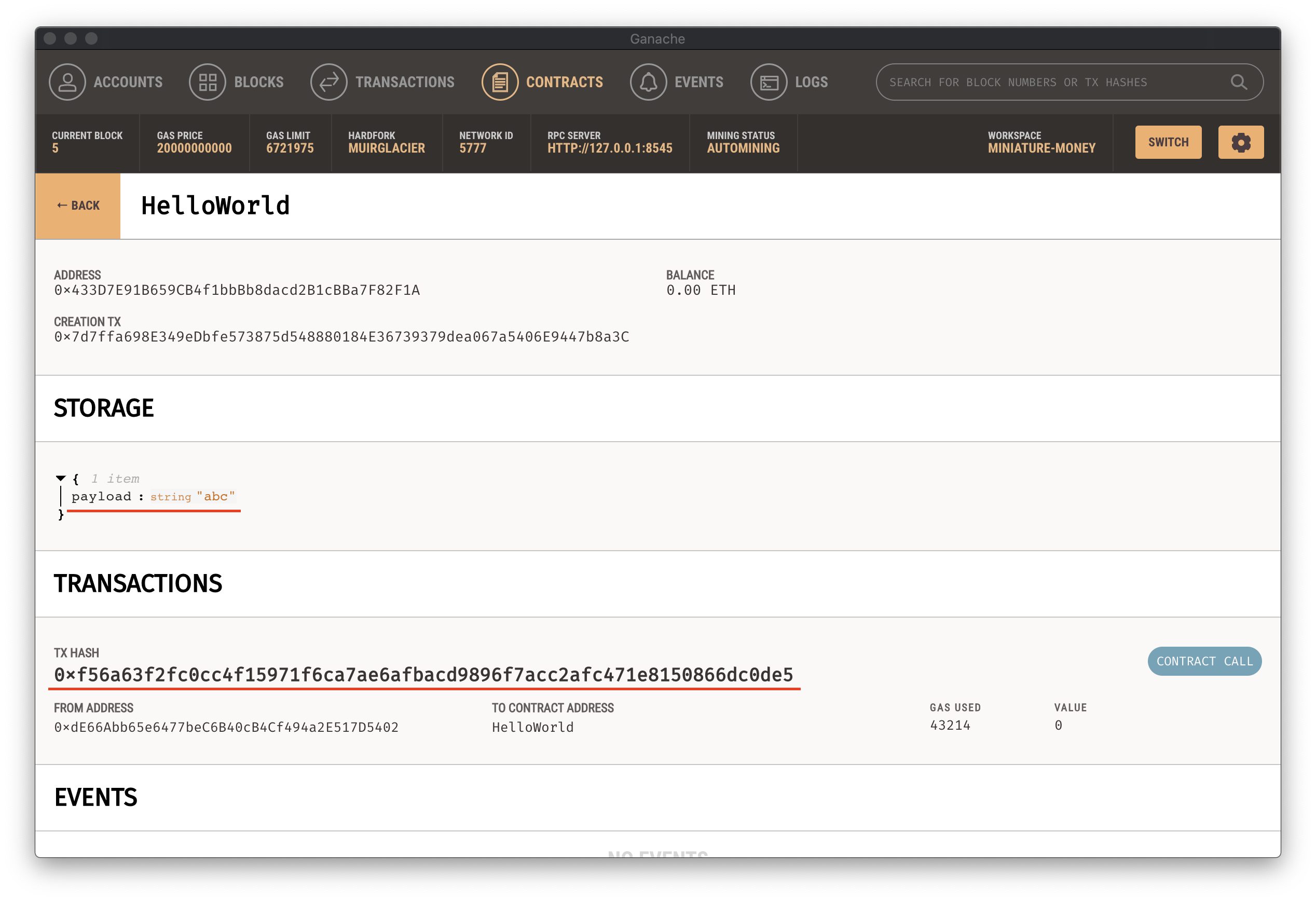 Notice the TX HASH, it should be the same as printed when you ran app.py. 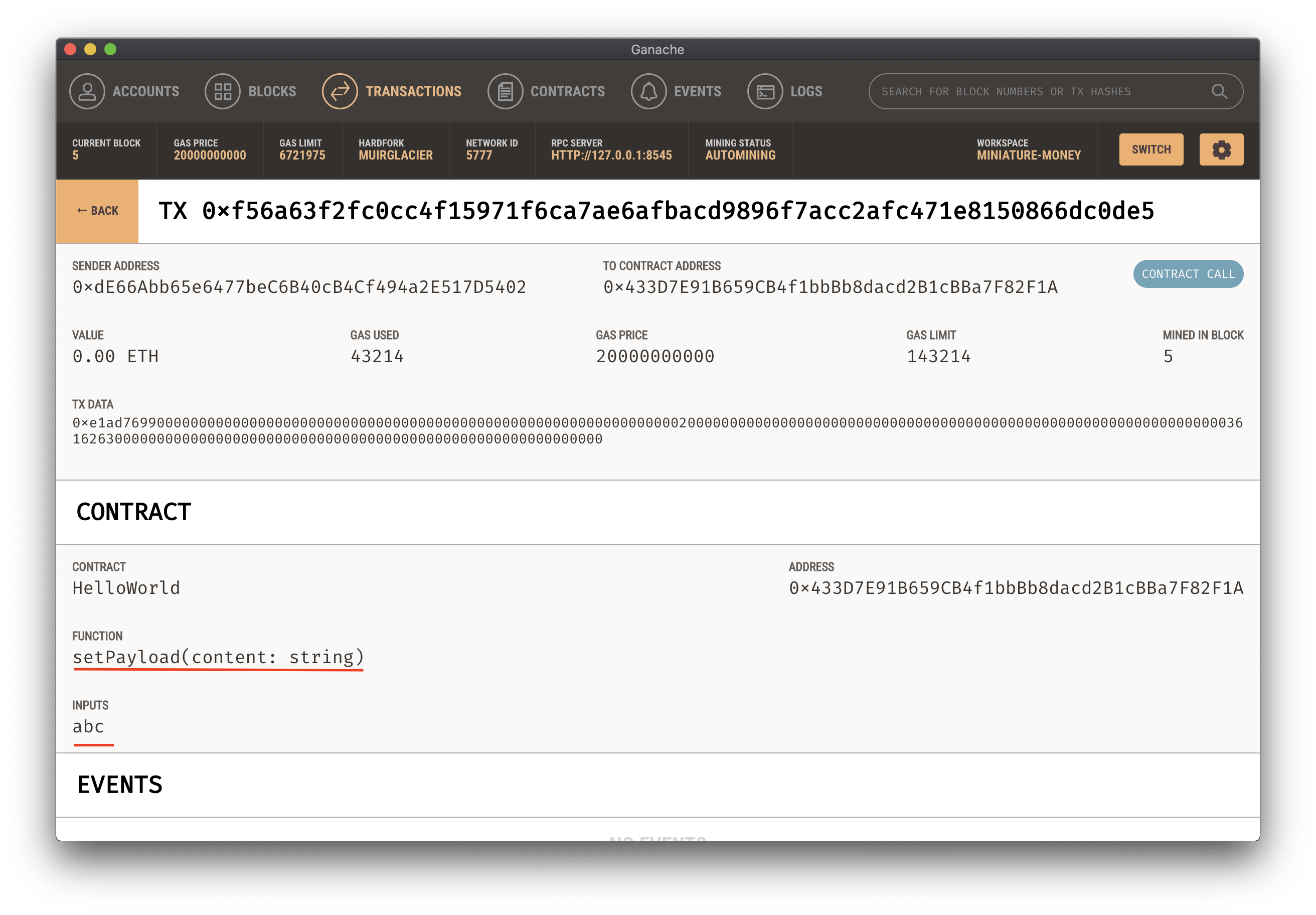 You can see both the function that was called and the inputs.

Run app.py a few more times, change abc (in tx_hash = contract.functions.setPayload('abc').transact()) to something else, then inspect your contract again. It's YOUR blockchain now, act up to it!

In this tutorial, you learned how to: